The saga of United Airlines’ long and tumultuous relationship with Cleveland Hopkins International Airport is quite noteworthy. An early and significant part of the “Mainliner” network and the “Friendly Skies,” CLE’s role in the United system took a series of ups and downs in the 1970s and 1980s, and again after the 2010 merger of United and Continental Airlines. This article will focus on a brief historical overview of the role of Cleveland in the rather complex development of United’s route structure. A future article will look at the growth of the first United hub at Cleveland in the 1970s and its eventual dismantling in the 1980s.

The Development of the First Transcontinental Commercial Air Route: How United Airlines was Formed and Cleveland’s Role

In the early days of commercial aviation, airline companies were awarded Contract Air Mail (CAM) routes by the United States Post Office Department starting in 1925. These were meant to feed the main transcontinental air mail route still operated directly by the Post Office. The Ford Motor Company was the first to begin service on one of these routes on April 3, 1925, between Detroit and Chicago. The second route was between Detroit and Cleveland on July 31, 1925, shortly after the opening of Cleveland Municipal Airport.

Bill Stout, a former associate of Henry Ford, founded Stout Air Services and started operations on a route from Detroit to Grand Rapids, Michigan on August 2, 1926, with the spacious, new and very popular Ford 4-AT Tri-Motors. He eventually relinquished air mail routes in 1926 because of poor loads but started twice-daily passenger and freight service between Detroit and Cleveland on November 1, 1927. Stout also inherited two air mail contracts between Chicago and Cleveland via Detroit from Ford in July 1928, and also held rights to extend the route eastward to Buffalo, New York. These routes were so popular with the public that Stout carried 5,640 passengers in 1928.

United Aircraft was quick to acquire Stout Air Services on June 30, 1929, thus expanding the Boeing system east to Cleveland (with those unused rights to Buffalo, tantalizingly closer to New York City). Eventually, Boeing acquired National Air Transport and its valuable route to New York via Cleveland on May 7, 1930. Inexplicably, United abandoned the Chicago-Detroit-Cleveland route, which it reportedly later regretted. Stout had specialized in passenger service, while NAT specialized in air mail, and thus, the first true transcontinental air route was established carrying both passengers and air mail. Chicago became the national hub of this transportation system and the new head office of United Air Transport was set up there.

United Air Lines (it became United Airlines in 1974 with its new livery), the name formally designated as such on July 1, 1931, introduced the first modern airliner, the Boeing 247, on March 30, 1933, and had 30 in service by June. By September 1933, United had nine flights daily between New York and Chicago via Cleveland on this fast, 10-passenger aircraft. However, as demand grew, United eventually purchased the larger and more comfortable Douglas DC-3 to remain competitive on this and other lucrative routes.

United touted its new DC-3s as “Mainliners” serving the “Main Line Airway” from coast to coast. This transcontinental route system competed with TWA and American, from north to south, respectively, along with Eastern up and down the east coast into Florida and New Orleans, for the so-called “trunk routes,” operated by the “Big Four” airlines.

A United B247 and Douglas DC-3 Mainliner parked at Gate 8 at CLE in 1937 (Cleveland Public Library Photograph Collection)
"In Flight With United Air Lines" postcard from the 1930s featuring an aerial view of downtown Cleveland. The passenger was asked to address the card and return to the stewardess, who would stamp and mail it. (Author's personal collection)

World War II interrupted some of the growth in the domestic airline market, but also stimulated demand for cargo and passenger flights to important industrial centers crucial to the nation’s war effort. The commercial airlines also contributed aircraft, crew, and training expertise for both pilots and maintenance personnel to the US Army Air Force. The war hastened the technological advances in aircraft design with such models as the Douglas DC-4 and Lockheed Constellation that would eventually enter the airlines’ fleets, along with surplus DC-3s, after the cessation of hostilities in 1945. Already in May of that year, United Air Lines expanded service into New England (the traditional domain of American Airlines) with service from Boston to Hartford and Cleveland, and points west from CLE.

Capital Arlines (and its Predecessors) and United

A brief mention should be made of Clifford Ball, who started service on the Cleveland-Youngstown-Pittsburgh route on April 21, 1927, under the name of Skyline Transportation Service. Pittsburgh Aviation Industries Corporation took over Ball’s airline in November 1930 and changed its name to Pennsylvania Air Lines. It later merged with Central Airlines in 1936 and was renamed Pennsylvania-Central Airlines (PCA), then Capital Airlines in 1948.

May 1930 Clifford Ball Timetable featuring the route from Cleveland to Washington, DC, via Pittsburgh and multiple other stops (http://www.timetableimages.com)
Pennsylvania Airlines 10th anniversary timetable featuring the final days of the Great Lakes Exposition, a world fair held during the summers of 1936 & 1937 in Cleveland. (http://www.timetableimages.com)
A Pennsylvania-Central Airlines (PCA) B247 receives service at gate 5 of the old CLE terminal in 1937 (Cleveland Public Library Photograph Collection)

By the 1950s, in competition with United, Capital Airlines operated key business routes from Cleveland, including to New York, Chicago, Detroit, and Pittsburgh using the elegant Lockheed Constellation and the fast, modern Vickers Viscount turboprop aircraft. It had added additional nonstop routes from CLE to destinations such as Atlanta, Tampa and Miami and had extensive operations at Hopkins by 1960, including jet service to Miami on Boeing B720s leased from United Airlines. United eventually merged with Capital on June 1, 1961, becoming the the world's largest commercial airline. It absorbed 7,000 employees as well as all of Capital's routes and aircraft.

Postcard image from the early 1950s with a Capital Airlines Constellation parked at the old CLE terminal. The United Air Lines hangar is visible in the background. (Kenneth Koehn via opshots.net) 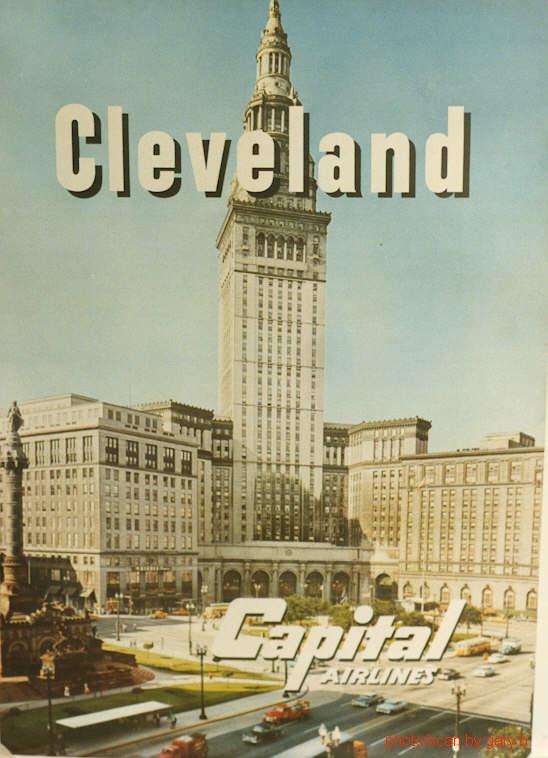 The only airline poster featuring Cleveland I can find, from Capital Airlines. Were there others? (http://www.baesel.net)
Capital Airlines ad from October 1959 showing the extent of its Cleveland operations, much of it on "jet-powered" aircraft (Cleveland Plain Dealer)
Postcard of a Capital Airlines Viscount loading passengers at the West Concourse in the late 1950s. Note the blue-tiled snack bar on the observation deck behind. (Author's personal collection)
Capital Airlines Timetable from October 1960, advertising new jet service between Cleveland, Pittsburgh and Miami, operated with B720s leased from United. This new Capital livery was rather short-lived, and the jets it operated were never painted in the Capital color scheme. (http://www.timetableimages.com)

With its acquisition of Capital Airlines completed, United solidified its position as the dominant air carrier in Cleveland and a major station in the United system with about 80 daily flights, second only to Chicago-O’Hare in number of UA flights. Routes radiated to most major business cities along the eastern seaboard, south to Atlanta and Florida, and west to Detroit, Chicago, Milwaukee, Denver and Los Angeles.

Vintage postcard image of United, Capital and Eastern aircraft around the new West Concourse ca. 1954 (Author's personal collection)
A United DC-6 gets fueled by SOHIO at the West Concourse circa summer 1957. Behind this is UA Convair and a DC-6 freighter parked in front of the not-yet-opened North Concourse. Note the hangar under construction in the background (Family Zwijnenburg)

A United Viscount (inherited from Capital) parked at the North Concourse on a snowy day in March 1967. Note the nose of a United Caravelle and two Northwest 727s in the background. (Bob Garrard via flickr.com)

United Air Lines also invested in infrastructure at Cleveland Hopkins Airport beyond terminal and concourse facilities. Together with American Airlines and SOHIO (Standard Oil of Ohio, now BP), it sponsored construction of a brand new hangar on the northeastern side of the airport.

The modern hangar, pictured below, opened on November 8, 1958, and was designed by the world-renowned architectural firm of Skidmore, Owings & Merrill (SOM), which, among many other airport projects, also designed a more well-known United hangar at SFO, opened that same year and since demolished. This hangar, together with a smaller hanger built for several Cleveland corporations and opened a bit earlier, cost approximately $4.5 million, and are still in operation, most recently for ExpressJet (ceased operations as a United Express carrier in August 2020) and Constant Aviation.

Stay tuned for Part 2 of this article focussing on the rise and fall of the first official United Airlines hub at Cleveland Hopkins International Airport in the 1970s and 1980s.

(Paul J. Soprano is an aviation enthusiast and amateur airport historian based in Cleveland, Ohio, USA)

A Visit to Cleveland Airport in the 1930s